In the first of a three-part series revolving around Cloud migrations, we are diving into “The Six R’s” and which approach may best suit you as and when you take the plunge.

Why Migrate to the Cloud?

There is no single one-size-fits-all trigger that forces an organisation to migrate to the Cloud, although research carried out by Deloitte last year found the following three causes listed as the top drivers for migration.

In another recent blog that we published, we also argued that by migrating to the Cloud ‘you are no longer restricted to your in-house technologies or your in-house maintenance and support. This means that your CIO’s and IT Directors can now focus more on business-critical services and applications that deliver direct results.’

One of these results was a blog from Salesforce, who put together a post titled ‘10 Reasons to Move to the Cloud’, in which they outline some of the following reasons you should consider changing:

With countless migration benefits and triggers, Cloud migration is on the up. Flexera’s '2021 State of the Cloud’ report further highlights this as findings showed that ‘90% of enterprises expect cloud usage to exceed prior plans due to COVID-19’.

Perhaps your organisation is one of them, and if that is the case, how do you know which migration strategy works for you?

In a whitepaper regarding AWS migration, Amazon coined “The Six R’s of Cloud Migration”. We’ve listed the “Six R’s” below and offered a brief explanation of them: 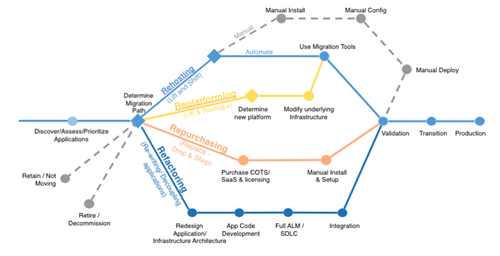 Everyone has to start their journey somewhere, but the hardest part of most new things is taking that first step. Each of those “Six R’s” may sound like a daunting process to go alone – but it doesn’t have to be.

Migration can offer peace of mind, helping you sleep well at night, knowing your security is optimised and at its most secure due to regular updates. Or, perhaps you are looking to reduce your monthly OPEX - or yearly CAPEX - which is possible due to better Cloud utilisation.

Switching to the Cloud sooner rather than later can offer numerous opportunities to stay ahead of the curve and the competition, so could it be time to partner with an MSP to help you identify which migration method you can use.

When it comes to digital transformation, there is no clear path to follow. Organisations are moving at their own pace and we have supported many of our existing clients in their Cloud journey. For some, this has meant dipping their toe in the water for the first time, whilst others have shifted to an entirely Cloud-based infrastructure. Contact one of our Cloud experts today and book a workshop with us to hear how we can support you on your Cloud journey.

These are key questions facing business owners and directors. You would not contemplate running a bu

Cloud has become mainstream and has started to revolutionise a wide range of industries, ranging fro

Accelerated digital transformation strategies have led to many organisations reshaping how they run.